Learn More About the Design

More About the Design 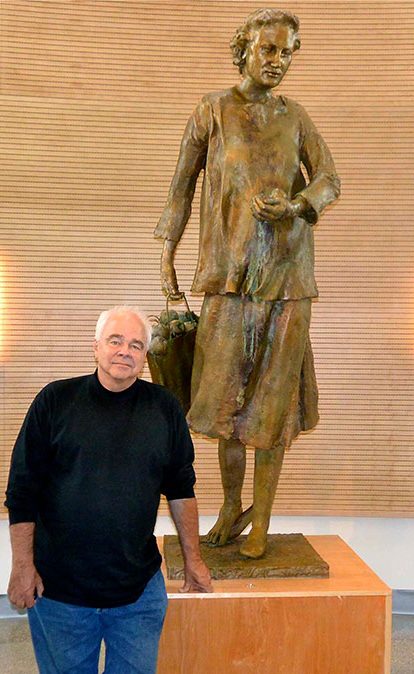 At the centre of the Shrine stands a life-size bronze Statue of Saint Gianna Beretta Molla. The statue is the work of American Sculpture, John Collier and was commissioned especially for this shrine. Gianna Emmanuela was deeply moved when the statue was revealed, as this was the first time a depiction of her mother with the child within her, Gianna, has ever been commissioned. In her own words, an emotional Gianna Emanuela commented, “never before have I been included with my mother in a double portrait of the two of us”.

The statue presents Gianna on the day she discovered that her fourth pregnancy was in a troubled state. Returning from her obstetrician and receiving the news that her life and the life of the unborn child was in jeopardy, Gianna is faced with a decision: either risk her life by bringing the pregnancy to full term or save her own life by having an abortion.

The statue presents Gianna now carrying foods stuffs for her family’s evening meal. As she contemplates her choice, her food items turn into a collection of apples. Apples from the time of St. Jerome, have often been used to depict temptation. Here, as Gianna wrestles with her decision, every temptation to have an abortion visits her. All her groceries become apples. Overcoming every temptation, the apples fall to the side, and the one she is holding is crushed. Gianna is noticed to be stepping out of her right shoe, expressing her conviction not to walk the path that might have easily been chosen, but to walk in the way of Christ. To walk in the way of love and sacrifice. Here in this moment, Gianna has chosen life for her unborn child.