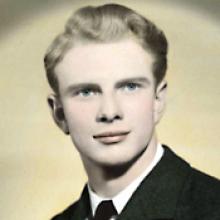 January 12, 1922 – November 12, 2015 Quietly, in the early minutes of Thursday, November 12, 2015 at the age of 93 years, our loving Opa died unexpectedly after a long and productive life. Remaining to forever cherish Walter’s memory are his daughter, Jocelyn Preston; son Glenn (Ingrid); beloved grandchildren, Jocelyn (Jay) and husband Mike, Reid, Erin Anne and Lauren; as well as brother-in-law Steve Spitzer. Walter was predeceased by his loving wife, Helen (December 25, 2014) after 70 years of marriage. On January 12, 1922, Walter was born in Halbstadt, Crimea, Russia and immigrated to Canada with his parents and a large extended Mennonite family in 1924. As a young boy growing up in Winnipeg’s North End, he made deliveries by bicycle for the Tribune and Liggett’s Drug Store. Walter was a risk-taker, shrewd entrepreneur and a hard worker from the time he was a child. He attended Argyle, Norquay, Lord Nelson and Isaac Newton Schools as well as Success Business College. Walter articled for two years with HR Birch Chartered Accountancy Firm before he left to serve in the Royal Canadian Air Force from 1942 to 1944. Upon discharge, he simultaneously worked for Winnipeg Electric, sold real estate and insurance and then rented TVs. In 1960 he established the Abbey Rents Equipment Rental business, in which he took great pride and satisfaction. Walter’s hobbies and fun were work, so he worked until the age of 85. He enjoyed many summers at his cottage at Boundary Park, as well as numerous warm winter vacations. Walter was a great provider and role model and what a wonderful sense of humour!!! His wisdom and generosity persisted until the end of his life. With the support of family, Walter courageously faced declining health. Many thanks to his compassionate home care staff who helped him maintain his independence and remain in his home before spending his last two weeks at The Poseidon Care Center. On Friday, November 27, 2015, Walter’s Funeral Service will be held at 1:00 p.m. in the Chapel in St. Benedict’s Monastery, 225 Masters Avenue, West St. Paul, Manitoba. In lieu of flowers, donations may be made to the St. Mary’s Academy Class of 65 bursary fund, 550 Wellington Crescent, Winnipeg, MB, R3M 0C1. Wojcik’s Funeral Chapel, 2157 Portage Avenue, Winnipeg, MB in care of arrangements 204.897.4665. For those who wish to sign Wojcik’s online Guest Book please visit our website at www.wojciksfuneralchapel.com “Vichnaya Pamyat (Forever Remembered)”

Make a Donation to the Grain of Wheat Fund in memory of Martens, Walter John