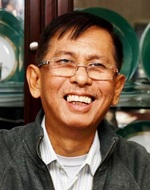 Remembering Danny…
Danilo de Leon Vicente was the eldest of the 8 children of Edgardo and Leticia Vicente. Born on April 27, 1950 in Cavite City, Philippines, he grew up to be a very responsible Kuya (older brother) to his siblings while his parents traveled abroad for work. He was the responsible and caring Kuya of Rey, Amy, Connie, Eduard, Louie, Ronnie & Jojie. He married the love of his life Vilma and had 2 children Jennifer & Miguel. He was a great family man; a loving and loyal husband. He wanted the best for his wife and children, worked hard to provide for a wonderful home and provided for their needs. He instilled the value of education to this children, taught them the importance of hard work, dedication and to always strive for excellence. His family grew when Jennifer married Arnel and had 2 children Jenel & Maynel. He was a loving and caring Grandfather, spoiled the grandkids, allowing them to get things that they like, but always with a thoughtful advise on life, school and meaningful activities that will make them better persons.
He excelled in school and gained countless friends along the way. Enteng, Dan or Danny, as he was called during his teenage years, became a dedicated member of DeMolay and was one of its Master Councilors. He became exposed at a young age to various working environments which gained him much wealth in life experiences that he carried into his family life and later on in his career. He worked for many years at IBAA (International Bank of Asia and America) and PCIBank. He was active in their basketball and bowling league and was a member of the Chapel Ministry. After retirement, he fulfilled his calling to further serve the Lord and His people. He found time to be more active in church activities serving at almost all possible organizations. He became the President of the Parish Pastoral Council, was with the Legion of Mary, Eucharistic Ministry, Ministry of the Word, Church Choir and Catechism Group. He found a new passion in teaching the youth, formally as a Professor at San Sebastian College-Recoletos de Cavite and through other means such as mentoring members of the Noveleta Theatre Guild, PREX (Parish Renewal Experience) and Legion of Mary. He then was fondly called Kuya Dan, Sir Dan and Tatay Dan by those whose lives he has touched in these various organizations. He was a disciplinarian and a perfectionist yet with a soft heart, a caring soul and always with a positive mindset. He has a passion for music, from contemporary folk, folk rock, country music and hymns. He played the guitar, sang well and enlivened everything he does with music. He is a smart man. He thirst for knowledge and is overflowing with wisdom. He went back to school when he came to Canada to help him find his place in a new environment. With his intelligence, wealth of experience, professionalism and well-mannered approach as a team member, he found a new niche at the Freight Audit Department at Maple Leaf Foods in Winnipeg. He was dedicated and proficient in his work and was well loved by his colleagues.
He always had a positive outlook on life because of his trust in God. And he exemplified this even after he was diagnosed with cancer. His choice was not to let anyone know except our immediate family – he didn’t want anyone to worry nor treat him differently. He wanted people to see and appreciate his strengths and abilities and not his health condition. He had offered his life to God and accepted His will wholeheartedly without questioning God and without jarring his faith. This kept him strong throughout the journey. He lived day to day just like the usual, went to work, to church, went out occasionally with family and friends, watched the news, read books and prayed to God. He had an unwavering faith in God, at the time that he was receiving the Sacrament of Anointing of the Sick, after a hymn was sung around him and while the Blessed Oil was being placed on his forehead by the priest, he began to close his eyes to sleep. The following morning, with family around him, he passed away peacefully to join our Creator.
“Tears come down your face,
When the last breath finds its way.
You’ve served well
You’re a preacher
You’re a teacher
You were a father not just for two
But for everyone who knew you
In many ways, small or big
You’ve helped everyone to be better
Your lessons will always be remembered
Your love will stay always and forever.”

Make a Donation to the Grain of Wheat Fund in memory of Vicente, Danilo L.