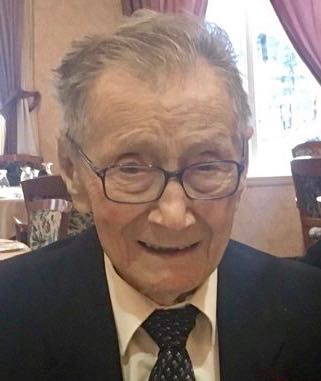 It is with great love and sadness that we announce the passing of our beloved father and grandfather, Joseph Turcinek. Joseph passed away peacefully at the age of 94.

He is survived by his daughter Lori and son-in-law Paul Cech-Manek; grandchildren, Dane and Jenna; plus many nieces and nephews. He will now be reunited with his loving wife Mary Sue (2011). He was predeceased by his parents, Annie and Cyril; and sister Emily Tuma of Leamington, Ontario.

Dad was proud of the five years he served in the Merchant Navy. During his service, he travelled the world until he returned home to Windsor, Ontario and met and married the love of his life, Mary Sue. Dad worked at Eaton Yale Corporation until his retirement. Joseph and Mary Sue moved to Winnipeg, to be closer to their daughter and grandchildren.

Dad loved reading the Free Press every morning over an early breakfast and watching the evening news; not much happened in the city or around the world that he wasn’t interested in. Watching sports and classic movies was a favourite pastime of his. He enjoyed playing cards and games with his friends at Stonecrest. Dad had an amazing memory. We used to say he could give Google a run for their money.
His greatest joy was spending time with his family and grandchildren (Dane and Jenna). His grandchildren were the light of his life!

You were the best Dad a daughter could ask for. You will be forever in our hearts, just as we always were in yours. We will miss your smile, your love, your wisdom and your caring ways.

We would like to extend a special thank you to Dr. David Breckman, the staff and Home Care Aides at Shaftesbury Assisted Living and the Palliative Care Team for their kind and compassionate care of Joseph. Our sincere appreciation to Veterans Affairs for their support over the years.

In accordance with Dad’s wishes, a private service for family was held and cremation has taken place.
If desired, a donation in memory of Joseph may be made to CancerCare Manitoba or to a charity of your choice.

Make a Donation to the Grain of Wheat Fund in memory of Turcinek, Joseph