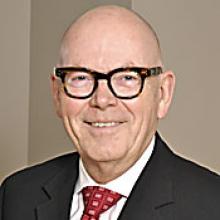 February 10, 1948 – March 14, 2011 And He will raise you up on Eagle’s wings, bear you on the breath of dawn, make you to shine like the sun, and hold you in the palm of his hand. Tom will affectionately be remembered as a one-of-a-kind, vibrant, and passionate man who embraced life and family. He always made the people around him feel good: with a sparkle in his eye, a bottomless sense of humour, and a desire to honour others, he worked hard, played hard, and loved deeply. He never missed an opportunity to tell family that they were loved and special, and he constantly recounted that he was the luckiest husband, dad, and papa in the world. He was the epitome of a charming gentleman: perpetually attentive, doting, and caring. Tom was predeceased by his parents, Fred (Pop) Chapman and Audrey Chapman Tovey. His memory will be cherished by so many who loved him: his soul-mate and wife of 40 years, Claudette; his two children: Danielle Kolton (David) and Jonathan Fullan (Jill); his three precious grandchildren: Mackenzie, Tate, and Nathalie from whom he received great joy; his niece, Janet (Steve and family); the Bogie Men golf troupe; travel friends; and business associates from around the globe. His canine companion, Oliver, was a continued source of comfort throughout the progression of his illness. Tom was born and raised in Toronto and graduated from St. Michael’s College School. His post-secondary education included studies at Clarke Institute, Syracuse University, Kingston General Hospital, and the Northern Alberta Institute of Technology. Tom was President and CEO of his own corporation which has been engaged in global healthcare consulting for over three decades. His partnerships included a number of renowned Fortune 500 corporations. Tom’s passion for healthcare was focused primarily in the area of orthopaedics, and he also took great pride in the contributions he made within his appointments to the Bone and Joint Decade; the World Health Organization; the International Society for Simulation in Healthcare; the Global Simulation Network; and the Royal College of Physicians and Surgeons. A long history of board and committee memberships were so fulfilling to him. Most recently, his guest lecture experiences in Canada, the United States, the United Kingdom, Australia, China, Philippines, and Brazil were a source of great enthusiasm and anticipation. His professional memberships, governmental and non-governmental associations, and projects kept him travelling until just recently. Tom approached his variety of community contributions over the past 30 years with the same curiosity, fervour, and enthusiasm with which he attended to everything. He served on advisory councils to the Premier, as a Board member of The Rotary Club of Winnipeg, the President of the Winnipeg Winter Club, a Director of the Winnipeg Symphony Orchestra, the Secretary of the Manitoba Catholic School Trustees Association, a member of the Canadian School Trustees Association, the Board Chair, St. Mary’s Academy and Board member of St. John Brebeuf School, and the Chair of the Sherwood Park Catholic Separate School District (Edmonton, Alberta). Travel was important for Tom, and he and Claudette embarked on a great variety of cross-global adventures in the course of their marriage. He loved to write engaging travel logs, and he continually brought back meaningful and individual keepsakes for all family members. Most notably, his Flat Tom travel journal and pictures from around the world, based on the children’s book Flat Stanley, will remain a cherished token for his grandchildren. Thank you to the Health Sciences Centre SICU whose compassionate care preserved Tom’s dignity at all times. We are grateful to have journeyed this with their guidance. In lieu of flowers, donations can be made to the Health Sciences Centre Foundation Inc., MS1-820 Sherbrook St., Winnipeg, MB R3A 1R9. A celebration of his life will be held on Saturday, March 19 at 11:00 a.m. in St. John Brebeuf Church, 1707 John Brebeuf Place. The Coutu family in care of arrangements: E. J. COUTU CO. FUNERAL DIRECTORS 680 Archibald St. 253-5086 As published in the Winnipeg Free Press on Mar 17, 2011

Make a Donation to the Grain of Wheat Fund in memory of Fullan, Thomas William