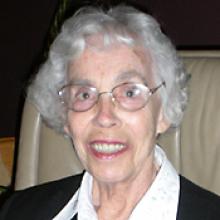 THERESE (TERRY) DESJARDINS THERESE (TERRY) DESJARDINS (nee PERRAULT) Peacefully, with family by her side, Thérèse Desjardins passed away on December 25, 2013. Thérèse was predeceased by her husband, Edward, parents Henri and Juliett Perrault, sisters Roberta, Lucille, and her brothers, René and Jean-Denis. She will be sadly missed by her son, Mark (Claudia); daughter Darlene (Terry Trueman); her sisters Yolonde (Gilbert) and Louise; her in-laws, Wilf, Joe, Marion, Claire, Edie; many nieces and nephews, and her best friend, Grace Sawyer. Grandma D will also be missed by Danielle Fingland (Shaun), Jennifer Walter (Matt), Darcy Desjardins, Brittany and Jeremy Trueman, Andrew and Sabrina Lucarz. Thérèse was born on May 17, 1926 in North Troy, Vermont, and grew up in Lennoxville, Quebec. She worked as a Junior Clerk at the law courts, and later as a music librarian at radio stations CHLT and CKTS in Sherbrooke. While working in Ste Agathe des Monts, Quebec, as a clerk for C.P.R. telecom, Mom transferred to Winnipeg to be near her sister, Lucille. She met our dad, got married and soon began a new career as a stay-at-home mom. The family first lived on Waller Avenue until 1968 and moved to Charleswood, on Harstone Road. Mom was a great cook and baker, even when she shared what was supposed to be wrong with the food! Mom always volunteered her time at the local community clubs or canteens. She loved the outdoors and nature and to feed the birds. She cross-country skied in the winter, and rode her bike with the Charleswood senior cyclists in the summer. She loved gardening and outwitted the deer by putting mesh nets on her petunias. Happy hour was introduced after Dad retired; she could make a mean Margarita! The grandkids remember her milkshakes, blueberry pancakes with homemade syrup, and special cookies. The girls enjoyed getting their hair braided just like the picture on the Children’s world book encyclopedia, and enjoyed the poems and stories she read to them from those books. All the grandchildren enjoyed the piggy-back rides and the indoor swing. Grandma D gave all the grandchildren her time, imagination and energy, something anyone would be proud to pass on to the next generation. In late 2009 and due to health reasons, our parents had to move from the family home. This was the first of four moves Mom had to endure. The family would like to thank all the doctors, nurse practitioner and W.H.R.A. health care nurses and aides who provided care to our mom throughout these moves. We are also grateful to the staff at the Parkway Retirement Home and the Rosewood Retirement Home (especially the Juniper House), the staff at the Victoria Hospital Unit 5 North, and finally the staff at the Foyer Valade Personal Care Home, where she spent her last days with the care and dignity she deserved. Mom will be entombed alongside our dad at Living Waters Columbarium in St. Gianna’s Roman Catholic Church upon its completion later this year. The Mass of the Resurrection will be celebrated on Tuesday, January 7 at 10:30 a.m. at St. John Brebeuf Roman Catholic Church (1707 John Brebeuf Place) with Rev. Fr. Darrin J. G. Gurr presiding. A reception will follow in the parish hall. In lieu of flowers, donations can be made to the Alzheimer Society, the Canadian Mental Health Association of Manitoba or St. Gianna’s Church Building Fund. As published in the Winnipeg Free Press on January 04, 2014

Make a Donation to the Grain of Wheat Fund in memory of Desjardins, Thérèse (Terry)