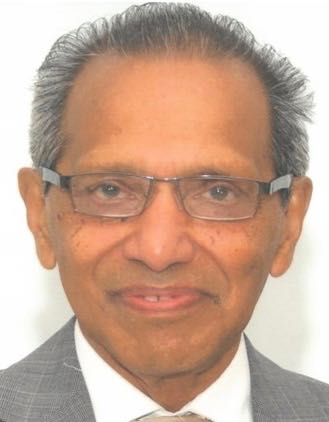 Jose Tharayil passed away on Wednesday, November 24, 2021, at the age of 80, in Winnipeg, Manitoba, Canada surrounded by his family.

Born in Kottayam Kerala India, Jose was the second of nine children. Bishop Thomas Tharayil was his grand uncle. Chevalier Jacob Tharayil was his great-grandfather. His father was James Tharayil, a banker and member of the Legislative Assembly of Kerala. His mother Nancy wrote the speeches for her husband when he ran for office.

In 1958 at the tender age of 17, Jose boarded a ship and immigrated to Halifax, Canada. Unbeknownst to him at the time, also on the ship was the man who would become his daughter’s father in-law 47 years later. After arriving, he completed his engineering degree in Halifax at St. Mary’s University. He also completed a master’s degree at McGill. Jose married Kunjumol Parel in 1967. They had three children together: Jim, Jay and Sherry.

During most of his professional life, Jose worked for Bristol Aerospace. He was literally a rocket scientist before moving into management. Jose held several important positions at Bristol, including Director of Engineering and Quality. He travelled across the globe as part of his work, including trips to Australia, Europe, Turkey and Malaysia. The accomplishment he is most proud of is the design, development production and eventual sale of the CRV-7 Rocket. You could say he was a Malayalee (legal) arms dealer. Jose retired from Bristol in 2003 but continued to work as a consultant till 2012.

Jose was a man of extraordinary talent. He built the basement in his original house. He had no trouble in the kitchen, preparing his famous salmon dinners on Saturday nights for his wife and children. Upon retirement, he was solo babysitter for his first grandson while Kunjumol kept working. He organized a Tharayil Sangamam in India in 2012, to celebrate 200 years of the Tharayil family.

Jose is also known for his excellence when it comes to cards. He was a highly ranked bridge player and won the inaugural Canadian National Teams Championship in 2001. Jose played cards in person and online. Even hospital stays couldn’t stop his card playing, as he would plug in his laptop and play from his bed.

He also literally wrote the books on 56. He has published 2 books, and a third one will be published shortly. In addition, he was instrumental in the start-up of a popular 56 online site which is played by users globally. Although his love of cards was intense, what he loved most was having his family around him, particularly his three grandchildren Joseph, Priya and Yuvika.

Every evening, Jose and Kunjumol would enjoy drinks, appetizers and a few laughs before having dinner. He always loved a good party. In fact, just a few days before he passed away, he had two of his brothers at his home, where they talked and played cards.

Jose never forgot where he came from and supported all the new Malayalee immigrants who came to Canada, just like him. This started with bringing over his three brothers to Canada in the 60s and 70s. He continued to guide the new generation right up until the time of his passing.

Jose truly was a unique and special man. He was always approachable and easy to talk to. He combined brilliance, hard work, adaptability with humbleness and kindness.

Visitation and Celebration of life was held on November 29 at Thomson “In the Park” Funeral Home, 1291 McGillivray Boulevard, Winnipeg.

Make a Donation to the Grain of Wheat Fund in memory of Tharayil, Jose