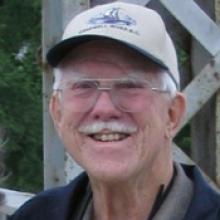 DR. T. FRASER GELLEY (1923 – 2015) Peacefully, but suddenly, at the Deer Lodge Centre, on April 28, 2015, after a life very well lived. Fraser will be lovingly remembered by Joie, his wife of 60 years, his sons Doug and Dick (Liz), grandsons Thomas and David, his brothers-in-law Lorne and Don Twiner. Fraser was a loving, generous, kind and thoughtful husband, father, grandfather and friend to all. Fraser had a very special love for his grandsons, Thomas and David. He looked forward to special times watching and talking sports, especially hockey with David. Fraser came from a musical family and he sang with several church choirs, including St. Ignatius. He loved listening to Thomas play his guitar. Born November 21, 1923 in Kingston (ON) to Lt./Col. T. F. Gelley and Annette Gelley, Fraser was brought up at the Royal Military College, where he learned to swim, sail, ride horses and shoot. Educated at Regiopolis College, Kingston, and University of Toronto (Dentistry 1951), Fraser served as a lieutenant in the Artillery during the Second World War and was a major in the Reserve Dental Corps. Fraser practised dentistry at the Boyd Building for 52 years. Victoria Beach was a special place for Fraser – a time to laugh and share with family and friends. Fraser – with his lifelong love of learning – was the champion Trivial Pursuit player at Deer Lodge Centre! Fraser touched many people in his life and will be greatly missed by all. A Funeral Mass celebrating Fraser’s life will be said on Wednesday, May 6 at 2:00 p.m. by Father Paul Gemmeti, at St. Marguerite’s 17 Wing, 2235 Silver Avenue at Whytewold Road. The family wishes to thank Deer Lodge Centre, T4 for their care of Fraser over these last months. In lieu of flowers, donations to Deer Lodge Centre T4, 2109 Portage Avenue, Winnipeg, MB, or the Heart and Stroke Foundation, 6 Donald Street, Winnipeg, MB, R3L 0K6 are appreciated. At Fraser’s request, those attending are requested to dress casually. NEIL BARDAL FUNERAL CENTRE 204-949-2200 neilbardalinc.com

Make a Donation to the Grain of Wheat Fund in memory of Gelley, T. Fraser