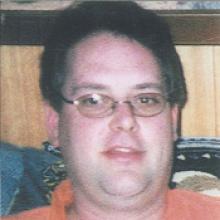 July 26, 1966 September 19, 2013 It is with deep sorrow, with his family by his side, we announce the passing of our son, brother and father Steven at the age of 47 years. Left to cherish Steven’s memory are his mother Genevieve Thompson Kirkpatrick; father Delvin and stepmother Brenda; sons, Andrew (Norine, Curtis), Justin (Anita, Raylene); brother Christopher; step-sister/brothers, Candace (Joe), Chris (Tracy), Jeff (Terri); aunts, Dixie Sicliano of Thunder Bay and Faye Thompson of BC; uncle Tim Landry (Eloise) of Thunder Bay; as well as numerous nieces and nephews. He was predeceased by his maternal/paternal grandparents and his stepfather Dr. J. R. Kirkpatrick. Steve had a smile that could melt anyone’s heart. He was a great mechanic and had a successful business, but his love of the outdoors, boating and fishing at his cabin on Lake of the Woods was his greatest enjoyment. He will be missed by many. In compliance with Steven’s wishes a private Family Funeral Service has taken place. The family would like to thank the Grace Hospital ICU medical staff for the excellent care and support. Donations in Steven’s memory may be made to the Addictions Foundation of Manitoba, 1030 Portage Avenue, Winnipeg, MB R3G 0R8. Wojcik’s Funeral Chapel & Crematorium, 2157 Portage Avenue, Winnipeg 204 897 4665, wojciksfuneralchapel.com. Publish Date: Sep 28, 2013 STEVEN CRAIG THOMPSON On Thursday, September 19, 2013 Steven died at the Grace Hospital at the age of 47 years. In compliance with Steve’s wishes a private family Service has been held. A longer obituary notice to follow in Saturday, September 28, 2013 newspaper edition. Wojcik’s Funeral Chapel & Crematorium, 2157 Portage Avenue, Winnipeg 204 897 4665, wojciksfuneralchapel.com. Publish Date: Sep 21, 2013

Make a Donation to the Grain of Wheat Fund in memory of Thompson, Steven Craig