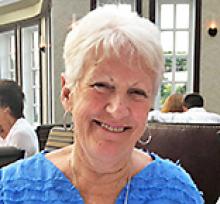 Peacefully Cynthia passed away in her sleep. She had been surrounded by all of her family in the few days prior to her death. She was happy that she had been able to attend Andrew and Lindsey’s wedding and she didn’t miss Christmas morning. She will be sadly missed by her husband James (Jim) (Slugger), four daughters Deb (Rolf), Becky (Garry), Barb (Tom) and Jamie; and her grandchildren Brad (Emily), her great-grandchildren Maddie and Claire, Brent (Amanda), Andrew (Lindsey), Jill, Jean and Tracy. Cynthia also leaves her sisters in the USA – Barb (Gene), Lois (Maurice), Julie (Jim) and Nan. Cynthia was predeceased by both of her parents Sky and Elizabeth, her brother Butch, and her son-in-law Ron Zarney Cynthia was born and raised in Mt. Vernon, Illinois until her family moved to Brandon, MB when she was 10. It was in Brandon that Cynthia met Jim Slevin, fell in love and got married. They married young and many said ‘it wouldn’t last’. But it did…63 years married, four daughters, six grandchildren and two great-grandchildren. Cynthia was a busy working mom, managing four busy kids and a husband who travelled. She worked at many places but her favourites were Tilden Rent a Car, Air Canada and a Touch of Class, where she made many long time friends. Time was kind to Cynthia, she always dressed beautifully and always had on fresh lipstick when Jim came home from work! Getting ready each day as if she was going to work, makeup and jewelery was just the way she did it! Even when she went fishing, which she loved and she was really great at. Bingo was another of her favourites. She won the last game she played a month before her death. Cynthia had a severe stroke in July 2015, leaving her partially paralyzed and unable to care for herself. The system decided that she should go to long term care but her family decided otherwise. Home we went and she was comfortable again, making her own decisions about when and what to eat and when to get up each day. Not being an early riser ever, it was important for her to be at home. Her evening ritual of having a glass of wine with Jim ended just recently when her health began to fail. Cynthia loved the lake, especially Matlock where she and Jim spent the last 15 years, and Arizona was their winter getaway and where they had many friends. Cynthia had too many friends to list and you know who you are. We thank you for your continued support, visits and phone calls. She was never alone. Flowers are gratefully declined and if you wish make a donation to Heart and Stroke Foundation of Manitoba or a charity of your choice. Cremation has taken place and we will have a Celebration of Life on Mother’s Day.

Make a Donation to the Grain of Wheat Fund in memory of Slevin, Cynthia Dee