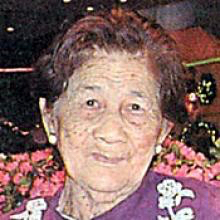 Viewing  was followed by prayers on April 7th, 2011 at the Mosaic Funeral Chapel, 1839 Inkster Blvd., with Reverend Father Rainerio Sarce.  A special thank you to Dr. Derreck Jensen for his kind, loving, and compassionate care.

Make a Donation to the Grain of Wheat Fund in memory of Samonte, Socorro B.