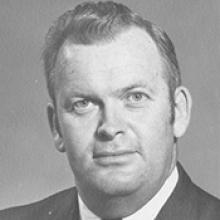 With family at his side, Peter A. Campbell passed away peacefully on Tuesday, August 2, 2016 at the South East Personal Care Home, in Winnipeg, MB, after a hard fought battle with congestive heart failure. Peter will be sadly missed by Jean (Gorman) his wife of 61 years of marriage; son Michael; daughters Margaret (David), Karen (Julian), Patricia (Neil), Mary Ellen (Andrew); and grandsons Steven (Natalie) and Brant. He is also survived by his sister Margaret Mills of Dartmouth, NS; brother-in-law Tom Gorman of Fredericton, NB, as well as well as many nieces and nephews from the Gorman, Mills, and Campbell clans. He was predeceased by his three brothers, Francis, Donald and Blaise; three sisters, Mary, Catherine and Bertha; brother-in-law John Gorman; and sisters-in law, Janet Gorman and Rosemary Gorman. On June 14, 1929 Peter was born in New Glasgow, NS. He was the youngest son of the late Margaret (MacIsaac) and Uriah Campbell. Peter loved sports and in his younger years he was an avid runner, boxer, curler and golfer. He also enjoyed coaching and watching his children participate in sports and musicals. It was through his love of dancing that he met Jean at a CYO dance in Fredericton, NS. Peter loved to travel and together he and Jean toured Asia, Europe, North America and the Caribbean. Cooking was always a passion and travelling introduced new foods and spices for Peter to add to family dinners. A favourite pastime of Peter’s was reading, mostly non-fiction and political biographies which provided fodder for debates and discussions with his children and friends. He was an honorary life member of the Knights of Columbus. A long career in the finance industry had Peter and his family moving from the Maritimes to Alberta before finally settling in Winnipeg in 1972. His witty sense of humour and his wonderful knack of chatting, resulted in many great friendships; he loved coffee with the guys’. Funeral Mass will be celebrated on Wednesday, August 10, 2016 at 11:00 a.m. in St. Timothy Roman Catholic Church, 135 John Forsyth Road, Winnipeg, Manitoba. The family would like to sincerely thank the staff at the South East Personal Care Home for their kindness and compassion. In lieu of flowers, if friends so desire, donations may be made to the Heart and Stroke Foundation of Manitoba, 200 – 6 Donald Street, Winnipeg, MB R3L 0K6. Wojcik’s Funeral Chapels & Crematoriums, Winnipeg, 2157 Portage Avenue, 204.897.4665 www.wojciksfuneralchapel.com As published in the Winnipeg Free Press on Aug 06, 2016

Make a Donation to the Grain of Wheat Fund in memory of Campbell, Peter A.