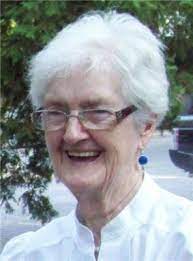 Kathleen O’Keefe of London passed away peacefully on Tuesday, September 21, 2021. She was in her 91st year.  Kathleen is survived by her children, Rob and Tish O’Keefe (Winnipeg), Maura and Jim Cameron (London), Kevin and Lori O’Keefe (Aurora), and Deirdre and Pat Grixti (Whitby).  Sister of Betty Balance (St. Thomas), and brother Danny and Dolores Allen (London).  Sister-in-law of Betty and Margaret Allen (Belfast, Ireland).  Loving Grandmother of Katie, Maggie, Jimmy, Tessa, Michael, Madeline, Sean, Jack and Luke, and seven great-grandchildren.  Predeceased by her husband Bob O’Keefe (Jan 9, 1999) and her son Sean Daniel (May 7, 1986).  Also predeceased by her parents, Robert and Martha Allen, sister Christine Goodall, and brothers John, Robert and Joseph (all of Belfast, Ireland).

Kathleen was born November 18, 1930 in Belfast, Ireland.  She emigrated to Canada in 1950, where in 1953 she met our father Bob, who had also emigrated from Cork, Ireland.  They married in 1954.  As a young lady mom worked for London Life and 3M as a secretary which she had trained for at school in Ireland.  It was 1968 when dad bought a variety store on Hale Street in London which we named the OK Variety, where most of us children remember our formative years.  When our brother Sean passed away in 1986 it was decided shortly thereafter that mom and dad would retire and sell the business.

Kathleen was a women of strong faith and as children we always remember the rosary beads being close at hand.  While in Canada our home parish was St Patrick’s where Mom was very involved in the CWL.  While we mourn our mother’s passing we know she is enjoying a party in heaven where she is able to see her son and husband again, not to mention her many good friends and family who will also be there to greet her.

We would like to thank the good people and staff of Glendale Crossing, where Mom spent the past 5 years.  A special Thank You to Barb at GC for making our mom so comfortable and peaceful these past few weeks.  In lieu of flowers we encourage people to donate to the Alzheimer’s Society.

Visitors were received on September 23 in the O’Neil Funeral Home, 350 William St., London.
The Mass of Christian Burial was celebrated in St. Patrick’s Church, Dundas at Oakland St., London, on September 24, followed by interment in St. Peter’s Cemetery, London.

Make a Donation to the Grain of Wheat Fund in memory of O’Keefe, Kathleen