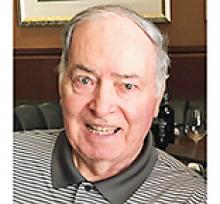 It is with great sadness that the family of Bob Nieman announces his passing on Saturday, August 4, 2018 at the St. Boniface Hospital at the age of 73, peacefully, with his wife Liz and family at his side. Bob was the beloved husband of Liz and father of Bob Jr. (Margo), he is also survived by his brother Duane (Lynn), sister-in-law Charlene and brother-in-law Ed (Elsie). Bob was predeceased by his parents, William and Lyola Nieman, and his brother Ken. He was born in Cudworth, Saskatchewan and lived in Melville between 1946 to 1950 before moving to Winnipeg. He attended St. Ignatius School, St. Paul’s High School, and Shattuck – St. Mary’s School in Minnesota on a football scholarship. Bob played College football at NDSU and graduated with a degree in pharmacy. Upon graduation he returned to Winnipeg to work with his brother Duane and Ken in the family pharmacy business. Soon after he met his future wife Liz at the Winnipeg Canoe Club in July, 1970. In 1977 he was blessed with the arrival of his only child Bobby Jr. Bob continued to be active in sports coaching various levels of youth hockey for approximately 17 years. He worked in the family business until it was sold in 1992, then continued to work as a relief pharmacist thereafter. Bob and Liz travelled to Florida, Texas and Arizona for a number of years where they enjoyed golfing and spending time with family and friends. Bob and Liz were members at Breezy Bend for many years. The family would like to extend a heartfelt thank you to cardiologist Robert Kroeker, Bob’s doctor for 25 years. In keeping with Bob’s wishes, cremation has taken place and a Memorial Mass celebrating his life will be held on Thursday, August 16, 2018 at 10:00 a.m. in St. John Brebeuf Roman Catholic Church, 1707 John Brebeuf Place. In lieu of flowers, if friends so desire, donations in memory of Bob may be made to the Heart and Stroke Foundation. E.J. COUTU & CO. FUNERAL DIRECTORS 204-253-5086 ejcoutu.ca

Make a Donation to the Grain of Wheat Fund in memory of Nieman, Bob