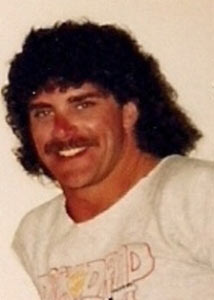 It is with deep sadness and heavy hearts that we announce that, after a courageous battle with cancer, Michael Louis Turgeon passed away peacefully at St. Boniface General Hospital Tuesday, February 23, 2010. Michael had an infectious personality and an amazing sense of humour, which drew people to him. He would brighten any room he walked into with his bright smile, beautiful blue eyes and quick wit. He had created a wonderful family of friends in his life. One of the people nearest and dearest to him was Tim Kaye, and they were like two peas in a pod. You felt like you were at a standup comedy show whenever they got together. Michael also had a great love of the outdoors and would love to spend time on the lake fishing. One of our fondest recent memories was just this past summer when we were all able to spend some time together at Andrea and Dave’s cabin on Rainy Lake. Michael was so proud of both of his nephews and he loved them both dearly. He was an avid follower of Kyle’s hockey career from the very beginning and attended games whenever he could. He was so excited that Nathan will be getting his Black Belt in Tae Kwan Do this summer and would have been there to see that for sure. He also passed his love for Flight Simulator on to Nathan, and I know he will fly around the world and do his uncle proud. Left to cherish Michael’s memory are his Father, Lyle Turgeon, of Winnipeg, MB, his Mother, Dinah Chapman, of Calgary, AB, his Sisters, Dana Ryan (Tim) and nephew Nathan, of Thunder Bay, ON, Andrea Turgeon (David) and nephew Kyle, of Fort Frances, ON and Jennifer Doherty (Craig) and nephews Liam, Aidan and Wyatt, of Vancouver, BC. Also surviving are great-uncle Jack of Edmonton, AB, Aunt Joyce and Uncles Harry, Pat and Ian of Calgary, AB, as well as cousins by the dozens . Michael’s brotherhood of friends at C.P. Rail, with whom he worked for 28 years, have rallied around Michael and his family since the beginning of his illness in February 2009. Michael cherished those associations and those friendships which stretch across much of the C.P. Rail system, especially from Thunder Bay, ON to Calgary, AB. The family would like to acknowledge the wonderful support and care given to Michael by his very dear friends Tammy and Rob. We will be forever grateful to you both. We would also like to express our deepest gratitude to his special friend, Janet, who has been a huge part of Michael’s life. Janet has become dear to all of us and we are thankful to her for all she has done for each and every one of us. We would also like to thank the wonderful staff at the Emergency Rooms and the wards at the Grace Hospital, Health Sciences Centre, St. Boniface General Hospital and the St. Boniface CancerCare Centre. You all know who you are. A Funeral will be held on Friday, February 26 at 11:00 a.m. at St. John Brebeuf Roman Catholic Church in Winnipeg, MB. A celebration of Michael’s life will take place in Fort Frances, ON at a later date. In lieu of flowers, donations can be made to The Canadian Cancer Society, or St. Boniface Hospital, CancerCare Centre.
As published in the Winnipeg Free Press on February 24, 2010

Make a Donation to the Grain of Wheat Fund in memory of Turgeon, Michael