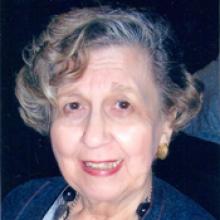 Constance Marjorie Lebrun (nee Olsen) passed away on March 7, 2013 at Riverview Health Centre at the age of 80. Marge, as she was usually known, was predeceased by her parents, Gerald Olsen and Constance Olsen (Meyers), and grandson, Patrick Rudy. She is survived by her husband, Dr. Richard Lebrun; her daughters Dr. Constance Marie, Mary Teresa (Vollbracht), and Jeanne Marie (Rankin); her sons, Paul Richard, Mark Joseph, and Dr. John Benedict; her grandchildren, Brian, Naomi, Gabriel, Jeremy, Claire, Emily, Jamie, Randi, Carlen, Jessica, and Justin, and ten great-grandchildren. Marge grew up in Minot, ND, and did her elementary and high school studies at St. Leo’s School in Minot. She earned a B.A. (with a major in music) from the College of St. Benedict, St. Joseph, MN, in 1954. After marriage to Richard Lebrun in 1954, and six babies who kept her busy for some years, she again took up her career in music, at first as an accompanist at ballet schools, and then as a piano teacher in her home. After the family moved to Winnipeg in 1966, she resumed her studies, completed a Diploma for the Toronto Royal Conservatory of Music, and became a member of the Registered Music Teachers of Manitoba. In addition to her long career as a piano teacher, Marge served in various executive roles in the Alumni of the Toronto Conservatory, the Manitoba Registered Music Teachers Association (which awarded her a Honorary Life Membership in 1977), and the Women’s Musical Club of Winnipeg. For 20 years she was the convener of the Variety – MRMTA Pianothon in Winnipeg, which raised over $150,000 dollars for music sessions in inner-city day care centres and music therapy for children with special needs. In 2007, she was honoured for her Pianothon activities with the Royal Bank Local Hero Award. Marge and her husband were active for a number of years as a “team couple” helping to present Marriage Encounters at Villa Maria Retreat Centre. Her adult children all remember their mother as always intensely interested in their lives and all their activities, eager to share her far-ranging intellectual interests with them, and as a person to whom they never failed to turn for advice and support. She will be greatly missed by her husband, her children, her grandchildren, and her great-grandchildren. A prayer vigil will be held on Friday, March 15, 2013 between 7:00 p.m. and 9:00 p.m. at Thomson Funeral Home, 669 Broadway. Sub-Deacon Brian Butcher (grandson) will preside over the service. A Funeral Mass will be held on Saturday, March 16, 2013 at 11:00 a.m. at St. Ignatius Church, 255 Stafford Street with a reception to follow. In lieu of flowers, donations may be made in Marjorie’s name to the Manitoba Registered Music Teachers Scholarship Fund, the Variety Special Music Program, or the Women’s Musical Club of Winnipeg Scholarship Fund. THOMSON FUNERAL HOME 669 BROADWAY, WINNIPEG, MB R3C 0X4 783-7211 Condolences may be sent to www.thomsonfuneralchapel.com
As published in the Winnipeg Free Press on March 12, 2013

Make a Donation to the Grain of Wheat Fund in memory of Lebrun, Marjorie