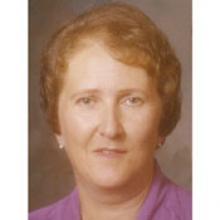 Margaret Mary Derry (nee McDonald) March 30, 1936 – June 18, 2014 Peacefully on Wednesday, June 18, 2014, with her family at her side, our beloved wife, mother and grandmother quietly passed away. Margaret was predeceased by her parents, Alice and John McDonald, brothers Walter (childhood) and Herbert. She leaves to mourn her beloved husband of 54 years, Art Derry, children Lyle Derry (Lexie), Allan Derry, Brenda and Jim Davidson, grandchildren Derek and Julia Davidson, brother and sister- in- law Donald and Elaine McDonald, brother-in-law and sister-in-law Emile and Patricia Lavoie, as well as many nieces and nephews. Margaret (Marg) was born at home on the family farm in Red Jacket, Saskatchewan. She moved to Regina as a young woman and worked as a secretary with the Saskatchewan Power Corporation. It was here where she met the love of her life, Art. They were married in August of 1959 in Regina. In1967 the family moved to Winnipeg where Marg focussed on raising her young family. Marg was always a hard worker and worked from home for many years while raising her children, typing for graduate students and professors. This led her to accept a secretarial position with the University of Manitoba. In 1988 Marg retired early to embark on a new adventure with Art. They moved to Harare, Zimbabwe, where they lived for the next nine years until returning home to Traverse Bay, Manitoba. Marg enjoyed many wonderful travels throughout the world, but her favourite place was the cabin in Traverse Bay surrounded by friends and family, where many good times were had.Marg was gifted and talented at knitting, crocheting, sewing and needlepoint and made many beautiful creations for family and friends. Marg cherished family and loved her husband, children and grandchildren dearly, always encouraging and supporting them in everything they did including work, academics, sports, artistic endeavours and hobbies. The Mass of the Resurrection will be celebrated on Tuesday June 24th at 1:30 p.m. at St. John Brebeuf Church, with Rev. Fr. Darrin J. G. Gurr presiding. (1707 John Brebeuf Place) A reception will follow after the liturgy. In lieu of flowers donations in Marg’s memory can be made to the Arthritis Society or Cancer Care Manitoba.

Make a Donation to the Grain of Wheat Fund in memory of Derry, Margaret Mary