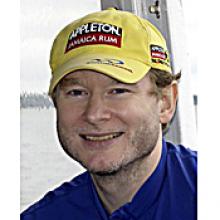 KIM HANNAH September 24, 1973 – October 31, 2011 Kim Hannah passed away on Monday, October 31, 2011 at the age of 38, after a courageous seven year battle with cancer. Kim is remembered by his wife, Kelly, the love of his life, and his cherished children, daughter Mattison and son Cordell, as well as parents, siblings, extended family and friends. Kim’s adoration for his family was unmistakable, and he drew great strength from the loving bond he shared with them. It is this love that sustained him through the challenges he faced with his illness. Kim had an incredible work ethic that reflected his commitment to lifelong learning. He obtained his high school diploma from Athol Murray College of Notre Dame in 1991. He went on to Brown University, from which he graduated in 1995 with a triple major in Bachelor of Arts in Economics, Urban Studies and Organizational Behavior Management. Completing his Masters (MBA) from the University of Guelph in 2007 was a significant personal achievement. Kim began his career with Cargill in July 1995, a career he thoroughly enjoyed until the time of his death. His greatest professional accomplishment was pioneering Cargill’s grain marketing consulting business. Kim was a courageous, insightful and humble individual who touched many lives. His love for life will forever be reflected through his family. The mass of the resurrection will be celebrated on Friday, November 4 at 11:00 a.m. at St. John Brebeuf Roman Catholic Church, 1707 John Brebeuf Place, with Rev. Fr Darrin J. G. Gurr presiding. In lieu of flowers, donations can be made to an account in the name of Hannah Family – In Trust at any Royal Bank of Canada.
As published in the Winnipeg Free Press on November 03, 2011

Make a Donation to the Grain of Wheat Fund in memory of Hannah, Kim