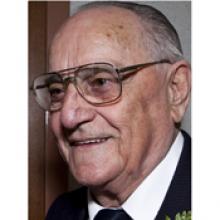 It is with profound sadness we announce the passing of John Strong Hodge, peacefully, in the wee hours of Sunday March 16th, at St. Boniface Hospital. John is survived by Isabel, his devoted wife of 56 years, his sons John ( Lenore ), James ( Elsa ), Jeffrey ( Julie ), his older sister Sadie as well as grandchildren Brian and Kevin. John was born on March 23, 1932 in Clydebank Scotland, growing up in the nearby town of Greenock. The youngest of 6 children, he left school at 14 to help support the family as a bicycle delivery boy for the Royal Mail. At one of the local dance halls, he met the love of his life, Isabel. After a visit with relatives in Winnipeg, John decided to stay. A year later, Isabel joined him and they were married at St Mary’s Cathedral in 1957. Family camping trips to Grand Beach, Birds Hill and Detroit Lakes were always fun. A trip to Scotland in 1977 was a family highlight. Saturday afternoons had John listening to the Metropolitan Opera broadcast while enjoying a Scotch. One of his fondest memories was meeting Luciano Pavarotti back stage. After his retirement from Canada Safeway, John and Isabel enjoyed traveling to Las Vegas, Florida and Vancouver Island. They also enjoyed many monthly bus trips to the casinos in the states and playing bingo at the Southdale CC. John lived his Catholic faith to the best of his ability; loving and providing for his wife and children. He was a true gentleman, earning the respect and admiration of all those he touched. Every time we have a wee dram or hear Nessum Dorma, we will think lovingly of you. The family thanks the staff of the Cardiac Ward (5A) at St. Boniface for their compassionate care. A mass of resurrection will be held at 2 PM on Friday, March 21 at Our Lady of Victory Church, 249 Arnold Ave. Entombment will be at the Living Waters Columbarium at a later date. In lieu of flowers, a donation can be made in John’s name to the Heart and Stroke foundation or to Manitoba Opera.

Make a Donation to the Grain of Wheat Fund in memory of Hodge, John S.