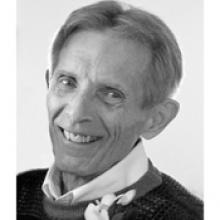 Peacefully on September 14, 2011, one day after his 68th birthday, Richard passed away at Riverview Health Centre. Remaining to forever cherish Richard’s memory are his wife Niki of 34 years of marriage: his sons Richard (Kristin) and Philip, and daughter Kathryn; and his sister Nancy. Predeceased by his father James, mother Florence; brother Gary, and sister Cynthia. Richard was born and raised in Winnipeg. He grew up in Lord Roberts, Tuxedo and River Heights, and spent the last half of his life in Fort Garry. In 1975, while working at Westburne, Niki asked him to accompany her to a friend’s wedding, he said yes, and they have been together ever since. Dad spent much of his life working at Wolseley (Westburne). He started in the Quotations Department in July 1960, after graduating high school from Grant Park. He went on to earn the roles of Sales and Operations Manager before being appointed District Manager in 1992, which is the position he held until retirement. As long as we can remember, Dad humbly referred to himself (to those he did not know) as a salesman. After retirement, he maintained many meaningful relationships with those he had worked with over the years. Our Dad was an excellent athlete. He excelled in many sports such as hockey, tennis, golf, football and baseball. In his early 20s he started coaching Junior hockey at River Heights. This was the beginning of his long and meaningful coaching career. He spoke of those days and those kids like it was yesterday. Later in life he found the same love coaching and watching baseball. It wasn’t too long ago he was striking guys out in batting practice, while trying new grips on the ball (until he was 58). Over the last few years, our Dad spent a lot of time with the Fort Garry Brewers where the guys simply referred to him as Upper Management. This group of guys reminded him of the first team of misfits he ever coached. Dad never wanted to be the centre of attention. He was a man of dignity, with a calm presence, and natural leadership abilities. Everyone always knew they could count on Dad because he always put others first and you could tell this was one of his greatest pleasures. Because of this, people didn’t hesitate to ever ask him for anything. They knew he would do it out of decency and goodness- no fanfare, he just made it happen. Richard was the rock of our family. But his wisdom and knowledge will live on forever. He had countless sayings- the one that resonates the most is, Walk softly and carry a big stick. He truly led by example. Richard/Dad, we love you, we miss you, and we cannot thank you enough for being the best father and husband one can ask for! A memorial service will be held on Wednesday, September 21 at 11:00 a.m. at Thomson In the Park Funeral Home, 1291 McGillivray Boulevard. Donations in Richard’s memory can be made to the Winnipeg Humane Society- 45 Hurst Way, Winnipeg MB, R3T 0R3 and Siloam Mission- 300 Princess Street, Winnipeg MB R3B 1M3. We remember Richard with a smile today. He was not one for tears, We reflect instead on our memories of all the happy years, We recall to mind the way he spoke And all the things he said, His strength, his smile, the way he joked, we’ll remember these instead. The good advice he gave us, his eyes that shone with laughter, So much of him has never died, but lives on ever after. He was a man of honesty, integrity and pride, Important then, the way he lived not the way he died. If tears should fall today, and yes some will be shed, For the many years without him here that still lie ahead. THOMSON IN THE PARK 925-1120 Condolences may be sent to www.thomsoninthepark.com
As published in the Winnipeg Free Press on September 17, 2011

Make a Donation to the Grain of Wheat Fund in memory of Partridge, James Richard