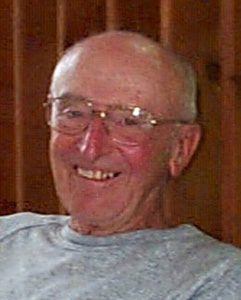 On Monday, January 25, 2010, Ed Desjardins peacefully passed away at Riverview Health Centre after a short battle with cancer. Cherishing memories are his beloved wife, Therese, his son Mark (Claudia) and daughter Darlene (Terry). Also mourning his loss are his grandchildren Danielle, Darcy, Jennifer, Brittany, Jeremy, Andrew, and Sabrina. Ed is very fondly remembered by his brother Wilf (Lena) in Winnipeg, and his sisters Edith (Larry) in Qualicum Beach, BC and Kathleen (Joseph) in Thunder Bay, ON, and numerous nieces and nephews. He was predeceased by his parents, Edward Philip and Elizabeth Ellen Desjardins. Born in Winnipeg on March 5, 1925, Ed lived a full and adventurous life. He grew up the third in a family of four children in the Brooklands area of Winnipeg. As a child he was everyone’s favourite with his long blond curly hair. Eager to serve his country, Ed enlisted in the 2nd Regular Battalion, The Winnipeg Grenadiers in May 1943. Following basic training in Shilo, he joined the Canadian Army in September 1943 and courageously served overseas from May 1944 to September 1946. He was reported missing in action while fighting in Italy and it was later determined that he was taken prisoner of war. Upon his return to Canada he worked as a Route Clerk for C.P.R., where he met Therese Perrault. They married in February 1956. From 1962 until his retirement in 1988, he enjoyed a career with Manitoba Telephone System as a teletype mechanic. He also took side jobs fixing time clocks. Ed enjoyed sports – curling, cross country skiing and golfing. He took up golf while in his 50s and was especially proud to have achieved a hole-in-one on the 8th hole at his club, the Charleswood Golf Course, in June 1991. He was an artistic person and jack-of-all trades. Clever and innovative inventions were a source of amusement for Ed, and entertainment for family and friends – for example the forced air, electric charcoal BBQ starter , and the child’s high chair that attached to a table top, which was featured in The Winnipeg Tribune in the early 1960s with his daughter as model. There was nothing he couldn’t make, and he loved the challenge of innovatively fixing broken things. Ed had a great sense of humour, and always had a pun or joke to share, a characteristic inherited by his son. Puzzles, crosswords and later Sudoku’s kept his mind sharp to the end. He was a very passionate person, embracing people with genuine love. He was also a very giving man, donating generously to many charities. One of his last requests, the day before he passed, was to ensure that a donation to Haiti relief be made on his behalf. He loved his wife deeply and took care of her until unable to do so. His family was most important to him and he worked very hard to provide well for them. He touched the lives of many people with his sense of humour, cheerfulness, handiworks and Turtles’. He will be sorely missed. Special thanks to his home care and palliative care nurses, especially Monique as well as Pam from CancerCare. Funeral mass will be celebrated on Tuesday, February 2, at 1:30 p.m. at St. John Brebeuf Church, 1707 John Brebeuf Place, with Fr. Darrin Gurr presiding. Puns and coffee to follow. Flowers gratefully declined. If so desired, donations may be made to CancerCare Manitoba, Haiti Relief, St. Gianna’s Roman Catholic Church Building Fund (Ed’s final resting place) or a charity of your choice. Chapel Lawn 885-9715
As published in the Winnipeg Free Press on January 30, 2010

Make a Donation to the Grain of Wheat Fund in memory of Desjardins, Edward