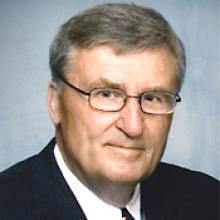 With his family at his side, Edward peacefully passed away on April 1, 2013 at the age of 77. Ed is survived by his beloved wife Christine; his four sons Edward (Tamara), Albert (Christine), Anthony (Lisa), and Andrew (Caitlin); his treasured grandchildren Jessica, Angela, Theresa, Benjamin, Samuel, Sara, and Avery; his brother and sisters Anthony, Bertha, Olga, Jean, Joyce, and Victoria; along with numerous nieces, nephews, and friends. Ed was predeceased by his parents Albert and Anna Buchel. Edward was born on March 24, 1936, at home, on the family farm in Shorncliffe, Manitoba. It was in Shorncliffe that he began school, and discovered his lifelong calling and passion for teaching.

After Grade eight, Ed was given the privilege to continue his education away from home. While gaining a Masters degree in Education, Ed taught in various Winnipeg high schools. His career then evolved, with him taking on a less traditional teaching role in the field of adult education. Here, he felt blessed that he was given the opportunity to guide students in both their personal and academic development. As important as his professional life was, nothing surpassed his love and dedication to his family. Ed and Christine were married on November 12, 1965. They spent their entire life together dedicated to the happiness of each other and to the raising of their four boys. Ed was a gentle, loving, and caring father and husband. His love will forever live with his wife and sons. In the end Ed struggled with Parkinson’s disease. He faced this battle with patience and grace. Ed was a model for all his family and friends, showing courage and strength in the face of adversity.

The family would like to express their thanks for the overwhelming love and support shown to Ed. They would also like to express their gratitude and respect for the caring staff at Riverview Health Centre. The Mass of the Resurrection will be celebrated on Saturday, April 6 at Saint Ignatius Roman Catholic Church, at 255 Stafford Street. Viewing begins at 8:45 a.m. and mass will be held at 9:30 a.m. All are welcome. In lieu of flowers, the family requests that donations be made to the Parkinson Society of Manitoba or to Riverview Health Centre. THOMSON “IN THE PARK” 204-925-1120 Condolences may be sent to www.thomsoninthepark.com
As published in the Winnipeg Free Press on April 06, 2013

Make a Donation to the Grain of Wheat Fund in memory of Buchel, Edward