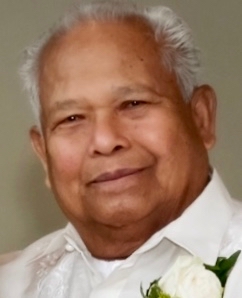 On Saturday, June 22nd, 2019 our beloved father and grandfather, known to us as Papa and Lolo, passed away peacefully at Victoria General Hospital in Winnipeg, Manitoba surrounded by his 5 children. Penticostes was born in Misibis, Tiwi, Albay in the Philippines on July 9th, 1935 to Cristina and Santiago Colina. As Penticostes put it, his parents were blessed with so many children. Penticostes’ older siblings: Faustino, Macilino, Nieves, Erasomo, and Emilina. His younger siblings: Beinvenido, Asuncion, Antonio, Rudy and Sofronia. Life wasn’t always easy, especially life during the war when, more than once, they needed to move to flee the invading soldiers. By working the land, wherever they were, they got by with rice, camote, cassava, and other things they farmed. Penticostes said, “You won’t starve over there if you aren’t lazy.”

When he was a child, Penticostes was unable to go to school until the end of WW2. There wasn’t even a school, so when classes finally began, they were held in a chapel until the community had the chance to build a real school. For him, it was a privilege to study. He said that he ran to school every day. After 6 years at elementary, he was named valedictorian and he was awarded a scholarship to pay for the first year of high-school tuition at Tiwi Catholic School. Then it was a 4-year diploma program at agricultural school in Pili, Camarines Sur. After working for some time and seeing how hard it was to make a living at it, Penticostes realized he wanted more, and to get that, he had to study again. This time, he took a course in auto mechanics.

This is the trade that led him to Francisco and Socoro Yorobe’s automotive shop in Manila. It led him to Fe Sorebillo, his future wife and ultimately, it led him to Canada. Penticostes married the love of his life on April 27th, 1964. They had 3 children – Thomas, Maria Theresa and Maria Fe. Like many Filipinos who want the best for their families, he went abroad to work for the American military in Guam and sent money home to his family in Marikina. Even with that sacrifice, Penticostes realized he wanted more for his family and to get that, a drastic change had to happen. After allaying his wife’s fear, Penticostes and Fe decided to immigrate in 1975, sponsored by Fe’s dear cousins Rolando and Adoration Yorobe. The family moved to Brandon, Manitoba to begin a new life and their family was blessed again with the additions of Christy and Carol Lynn.

Penticostes, along side Fe, worked tirelessly and often at several jobs in order to provide for the family, including his mother-in-law, Matilde Sorebillo who was invited to join the family in Canada. He constantly encourage his children to work hard, to excel, and to be good to each other. He modelled this by being a good friend and neighbour who would help anyone and everyone in need. It wasn’t unusual for him to spend weekends helping others out, especially newly arrived immigrants. He was most hospitable and anyone who has been to our home has very likely heard him utter the words, “Did you eat?”

He was an excellent grill-master and made the best shish kabobs. He loved to garden and took great pleasure and pride in the vegetables and fruits of his labour. Many have been gifted baskets of tomato or bunches of lettuce or incredibly large zucchini, fresh from his garden. He enjoyed fishing and was a master at making fish soup. He was a handy-man who built a car from the wheels up and constantly upgraded and renovated the family home. He laughed easily. He gave generously. He loved unconditionally. He was the steadfast rock that supported his wife, Fe through decades of health challenges. It was devastating to him to lose her just last year but his faith in God helped him keep moving forward. He was a constant loving guide to his children and if any of them/us are good people it was in large part because of him. He was the doting Lolo who couldn’t get enough of his wonderful grandchildren and appreciated each and every one of them and saw each one’s unique specialness.

He is survived by: five of his remaining siblings, and by his children… Thomas (Sharon), Maria Theresa (Larry), Maria Fe (Mike), Christy (Ben) and Carol-Lynn, and his grandchildren Alana, Nicholas, Jon-Rio, Larissa, Hanna, Alex, Vanessa and Megan.

He leaves behind wonderful vivid memories and lessons that his family will carry with them always. They will draw on them and find strength every time it is needed. These memories will continue to guide them forward. He will be missed always but we are filled with gratitude that we were blessed to have had him in our lives. To honour him, we will embrace life, hold dear to each other and live a life that he would be proud of.

In lieu of flowers, donations may be considered to the Kidney Foundation of Canada.

A Vigil Prayer Service will be held at Mosaic Funeral Chapel on Tuesday, June 25, 2019, doors open at 6:00 p.m. The Rite of Christian Burial was celebrated on Wednesday, June 26, 2019 at 10:00 a.m. at St. Gianna Beretta Molla Church. On Tuesday, July 30, his remains were entombed in Living Waters Columbarium.

Make a Donation to the Grain of Wheat Fund in memory of Colina, Penticostes