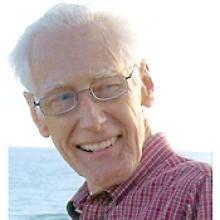 PETER WILLIAM CLARKE June 24, 1932 – July 7, 2015 On July 7, 2015, Peter passed away peacefully, at home, at the age of 83. Peter’s death will be grieved by his wife of 60 years, Mary; son Mark; daughters Theresa (Peter Williams), Pamela (James Buchok) and Mari; grandchildren Jennifer, Matthew, Beth, Sacha and James; sisters Esme White and Stasia Carlisle and families, and sister-in-law Sheila Clarke and family, all in England; and Ed Poisson and family in Windsor, Ontario. Peter will also be missed by Mary’s extended family in England, and by many dear longtime friends. Peter was born in Caistor, England. In March 1940, Peter sailed to Canada with his sister Esme and brother George as part of Britain’s War Evacuation Program, arriving at Pier 21 in Halifax and taking the train to Windsor, Ontario where he was welcomed into the home of Edmund and Amanda Poisson and family. In May 1945 he was “returned” to England, much against his will, for he loved his adopted family and country. Peter served in the British Merchant Navy from 1948 to 1955 and had a lifelong passion for sailing. He and Mary were married in January 1955 and soon after immigrated to Canada where they were warmly received by the Poisson family. Peter was happy to be back in Canada and never lost his love for this country. The family would like to thank the many nurses and home care workers who cared for Peter with such compassion over the last six months. Funeral mass will be celebrated at St. John Brebeuf Parish Church at 1707 St. John Brebeuf Place, on Tuesday, July 14, 2015 at 10:30 a.m. with Father Mark Tarrant officiating. A reception will be held in the Church Hall following mass. In lieu of flowers, donations may be made to the St. Paul’s High School Bursary Fund, 2200 Grant Ave., Winnipeg, MB R3P 0P8 or the Salvation Army’s “Neighbours Helping Neighbours Program”, 324 Logan Ave., Winnipeg, MB R3A 0L5. NEIL BARDAL FUNERAL CENTRE 204-949-2200 neilbardalinc.com

Make a Donation to the Grain of Wheat Fund in memory of Clarke, Peter