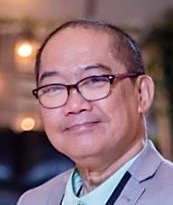 Surrounded by his family, Rolando Tan Bonifacio peacefully joined our Creator at 63 on February 14, 2022, Monday, at 5:22pm after a long and courageous battle with cancer.

Born in 1958 in the town of Macabebe, Pampanga in the Philippines, Roland as he is fondly called is the eldest child of the late Teodoro Cano Bonifacio and Milagros Tan Bonifacio.  Roland was born with a twin sister who only lived for a few weeks.  He grew up mostly under the care of his grandparents as his parents ran a textile and shoe store about 450km south in Naga City where their family eventually settled.  Roland moved and continued his college education in Naga City where he met his wife, Emma San Juan, of over 35 years.

Known as an industrious person, Roland ran his own tailoring shop until he was diagnosed with cancer prior to him, his wife and 3 kids immigrated to Winnipeg, Canada on August 15, 2005.  Roland beat cancer and lived a full life in Canada.  Despite his quiet presence, his love for cooking and music brought joy and life to every gathering.  He was a devoted husband and father whose primary love language is service.  He found joy in preparing meals for his family and meticulously maintaining a pristine home.  Even after being diagnosed again with cancer, Roland, a man of few words, tried his hardest to be of service to his loved ones.

Roland is survived and will be deeply missed by the love of his life, his wife Emma, together with their children Stephannie Shayne (Mark), Princess Wayne (Toby), and Kim Olan, as well as his constant source of happiness, his granddaughter, Scarlett Maleigha.  Roland also leaves behind his mother Milagros, siblings Nelson (Louella), Elizabeth (Teody), William, Vivian (Justin), and so many more family in the USA, Philippines, and Canada who are all left to cherish and lovingly remember their memories of him.

Make a Donation to the Grain of Wheat Fund in memory of Bonifacio, Rolando T.