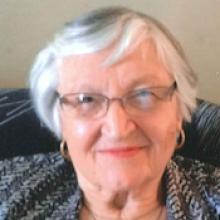 March 12, 1932 – March 11, 2016 It is with immense sadness we announce the sudden passing of our beloved mother. She was predeceased by her husband Theodore, parents Albert and Anne Buchel, brother Edward Buchel, and brother-in-law John Kovich. Remaining to cherish Bertha’s memory are her children Roger Okrainec (Debbie), Norma Tombs (Dan Sie); grandchildren Ryan Tombs (Cheri), Brent Tombs (Meghan Black), Jeff Okrainec, and Jillian Nesbitt (Ryan); great-grandchildren Brooke, Grace and Rhett Tombs; brother Tony Buchel (Iris), sister-in-law Chris Buchel, sisters Olga Kovich, Jean Timchisen (Nick), Joyce Boychuk (Bob), Vicky Baranyk (Stan); numerous nieces, nephews and friends. Mom would want us to mention her granddogs Stella, Oakley and Bandit as they brought a special joy to her that only retrievers could, particularly at this stage of her life. Mom was born in Winnipeg and formulated her early years on the farm in Shorncliff. She met Ted and married in 1949. They settled in Lac du Bonnet where they raised their two children. In addition to caring for the home and the farm, she was very active in the community. She held various executive positions on the Ladies Auxiliary of the Royal Canadian Legion, her church and the Lac du Bonnet Curling Club. She engineered two eight-enders in separate bonspiels, throwing skips rocks. She proved adept in business as she owned and ran a successful restaurant and later a painting company. She was never afraid to try something new. Bertha loved to travel and took many winter holidays with Ted to Hawaii, Texas, and the Caribbean Islands. She drove their motorhome “the whole way” to their favourite destination in Florida with her navigator by her side. She did this many times. Bertha and Ted moved to their Winnipeg condo in 1994 due to Ted’s failing health and had three good years together. She found new joy and support with her large family and grandchildren now close by. She enjoyed the activities in the condo with her new friends as she was an avid bridge player, puzzler and gardener. She relished her early morning swims with the gals. She became a member of the St. Gianna Beretta Molla Roman Catholic Church and regularly participated in many ministries. She enjoyed the church pilgrimage to Italy. Mom also had the opportunity to travel to Australia to visit her niece and family. The new era of her life was the marriage of her grandchildren and the arrival of great-grandchildren. This resulted in travel to the USA and Western Canada for wonderful visits. Her last trip was a destination wedding to Cancun for her granddaughter’s wedding. In 2013 Bertha was diagnosed with vascular dementia which necessitated a move to a safer environment at the Rosewood. Unfortunately this was short lived and resulted in temporary placement at the Victoria Hospital. She developed physical ailments which worsened until the Lord called her on March 11, 2016. The family would like to express our sincere thanks to Dr. K. Picard who so compassionately cared for Mom over the past 21 years, to Dr. Barry Campbell for his expertise, and the staff on 5 North and 3 South. In lieu of flowers, if you so wish, donations may be made to a charity of your choice. A celebration of the Mass of the Resurrection will be held at 10:30 a.m. on Thursday, March 17, 2016 at the St. Gianna Beretta Molla Roman Catholic Church, 15 Columbia Drive, Rev. Fr. Darrin Gurr officiating. Family and friends may sign a Book of Condolence at www.glenlawn.ca Glen Lawn Funeral Home 204-982-7550 As published in the Winnipeg Free Press on March 15, 2016

Make a Donation to the Grain of Wheat Fund in memory of Okrainec, Bertha