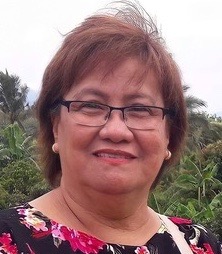 On Tuesday, November 9, 2021, Irma Aguinaldo, loving wife, and mother of three children, passed away at the age of 69.

Irma was born on June 3, 1952, in the town of Pateros, Manila, Philippines to Nicanor and Leonarda (Escober) De Leon. She received her Bachelor of Science degree in Customs Administration from the Philippine Maritime Institute and worked her entire career as a customs broker.  On June 3, 1973, she married the love of her life, Florencio Aguinaldo.  They raised three children, Florirma, Tristan and Erwin.  In August 2014, they happily migrated to Winnipeg, Manitoba, Canada to be with two of their children and grandchildren.

She loved to be called “Mommy Irma” and her relatives often called her “Tita Jean” (derived from a famous actress in her era).  Irma also enjoyed listening to the Beatles, Karen Carpenter’s songs, and her favourite song was “Because You Loved Me”.  She loved to cook different kinds of Filipino dishes.  Irma liked to pamper herself by going to a salon and getting facials and her nails done.  She was also a fan of Filipino tele-novelas and spent time watching her favourite shows.  Irma was known for her upbeat and super down-to-earth personality combined with her selfless and compassionate spirit. She loved life, always laughing, and having so much fun making sure life was never dull.

Irma was preceded in death by her father, Nicanor, and her mother, Leonarda.  She is survived by her husband Florencio, her three children, Florirma (Felino), Tristan (Zuseth) and Erwin (Jack), her four grandchildren, Christan Jan, Floriane, Floreine and Kurt, her only great-granddaughter Cassandra Jean, her eight siblings Rosario, Purification (+), Generosa, Cleotilde (+), Victoria, Danilo (+), Consuelo, Nenita (+), her nephews and nieces and cousins.

The viewing service (Lamay) was held on Saturday, November 20, 2021, at Mosaic Funeral Homes located at the corner of Inkster Boulevard and Keewatin Street, Winnipeg, Manitoba, Canada.

Make a Donation to the Grain of Wheat Fund in memory of Aguinaldo, Irma