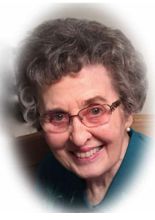 Agnes was born near Esterhazy, Saskatchewan, to Joseph and Mary Firkola, the fourth of five children. At the age of 19, she moved to Lethbridge, Alberta, and later met and married Ronald Makarenko in 1959. Together they had 2 children, Roland (Billie Jo) and Ronda (Claude). She was widowed in 1966. After raising her children, Agnes married Ken Blampied in 1982, traveling the world together until Ken’s passing in 2013. Agnes took great pride and joy in her grandchildren, Nicholas, Marie-Renée (Justin), Sebastien (Kaylee) and Claudia. “Well done, good and faithful servant.”

Make a Donation to the Grain of Wheat Fund in memory of Blampied, Agnes Mary